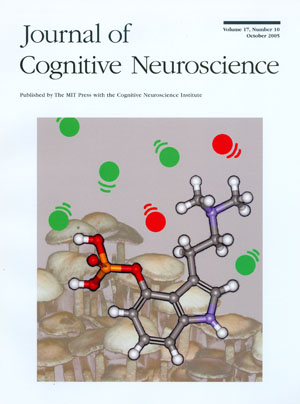 The Heffter Research Center Zurich (HRC-ZH) has been inaugurated in 1999 by Prof. Franz X. Vollenweider to support multidisciplinary research into the neural basis of consciousness.

Pharmacological and non-pharmacological models of altered states of consciousness (ASC) provide a unique empirical base for identifying the neuronal correlates and mechanism of self-consciousness, emotion regulation, social interaction, imagery and creativity, most relevant for human well being and for our further understanding of mental disorders related to these domains.

Mission of the Center

The HRC based at Department of Psychiatry, Psychotherapy and Psychosomatics, University Hospital of Psychiatry Zürich, with close collaborations distributed at the University of Zürich and the Swiss Federal Institute of Technology (ETH-ZH), provides a milieu for interdisciplinary scientific collaboration and an organizational structure that will facilitate translational activities between basic molecular, pharmacological and functional neuroimaging studies as well as clinical studies that have the common focus on identifying the psychological and neuronal base of normal and altered states of consciousness, and exploring the clinical potential of novel compounds and therapeutic approaches to foster personalized treatments.

The HRC provides a continuing international platform for sustained training and promotion of young scientists, Master and PhD students with a strong interest in neuroscience based consciousness research from Switzerland and abroad. Scholarships such as the Albert Hofmann Young Scientist or Fellowship Award to host international collaborative researchers and educational courses in basic and clinical consciousness research shall be offered on a regular basis.

The organization of international conferences, workshops and multidisciplinary collaborative studies shall be fostered to achieve sustainability and to get more awareness and main stream in the scientific community and public.

Psilocin is the active metabolite of the indolealkylamine psilocybin, the psychoactive component of magic mushrooms and a classic psychedelic drug. Low-to-moderate doses of psilocybin can produce a multifaceted altered state of consciousness that is characterized by a loosening of the self-non-self boundary, changes in perception including dreamlike imagery, alterations in the mode of thinking, and changes in emotions ranging from heightened basic mood to euphoria and bliss (Studerus et al. 2011). Although our knowledge of the effects of serotonergic psychedelics on emotion regulation is still little, two recent studies from our lab demonstrate that psilocybin has the ability to enhance mood and to shift the processing of negative stimuli towards processing of positive stimuli in healthy subjects (Schmidt et al. 2012, Kometer et al. 2012). Furthermore, behavioral and neurophysiological evidence indicates that these emotional effects of psilocybin are primarily mediated via serotonin 5-HT2A receptor activation (Kometer et al. 2012), although other subtypes of serotonin receptors may also be implicated (Sard et al. 2005, McKenna et al. 1990). In addition, experimental findings suggest that serotonergic psychedelics such as LSD and psilocybin have glutamate and dopamine enhancing effects in neuronal circuitries that are critical for mood regulation (Vollenweider and Kometer 2010). Specifically, LSD increases glutamate concentration in medial prefrontal cortex in animals and psilocybin activates prefrontal-limbic brain regions in healthy human subjects. Along this line it is notable that glutamate modulating agents such as ketamine have rapid and sustained antidepressive properties, presumably via activation of brain-derived neurotropic factor (BDNF), which in turn promotes neuronal synaptic plasticity (Autry et al. 2011). Given that psychedelic 5-HT2A agonists were also found to increase BDNF in rodents, it is conceivable that psilocybin may also have antidepressant properties and may shift the well established emotion processing bias in patients with major depression (Disner et al. 2011).

The aims of this study are twofold. In a first step, we aim have investigated psychological and biological mechanisms that contribute to the psychedelic and emotional of effects psilocybin and which may mediate the putative antidepressant of psychedelics (Kraehenmann et al., 2014). Second, given the heterogeneity of the depressive syndrome, we aim to identify functional (bio)markers that may help to predict individual treatment responses and thus fostering more specific personalized treatments. The methods used are molecular and functional magnetic resonance imaging (fMRI/MRS), partially in combination with electroencephalographic brain mapping (EEG-ERP). 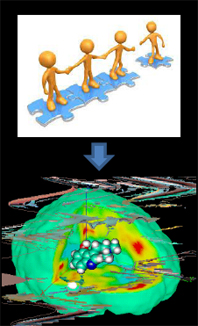 The present project aims to investigate the effect of psilocybin vs. placebo on social cognition, interaction, and behavior by applying behavioral, psychophysiological, and functional magnetic resonance imaging (fMRI) methods. We hypothesize that the stimulation of the 5-HT 2A and 1A receptors 1) reduces the reaction to negative social interactions and 2) increases empathy, which is related to prosocial changes in moral decision-making.

Very often milestones for science were findings coming from pathological or non-ordinary states. For example, studies on brain-injured patients provided us with revolutionary and otherwise unobtainable insights into the neuronal bases of psychological functions. A similarly unique opportunity is offered by altered states of consciousness (ASC), induced by classical hallucinogens such as psilocybin or by different forms of meditation. At the very core of such ASC is the experience of dissolution of the self, indicating that the ego is not a fixed and static entity. By contrast, the ego constitutes itself though the interaction with the exterior physical world, leading to a sense of agency (awareness of being initiator, executor and controller of one’s own action in the world), body-ownership (sense of identification with physical body), self-location (experience of “where I am” in space), and first-person perspective (position from which I perceive the world). Accordingly, we suggest that by paying attention to this interaction in psilocybin- and meditation-induced ASC offers a unique opportunity to elucidate the unknown pharmacological and psychological mechanisms of self dissolution and (re-)formation. 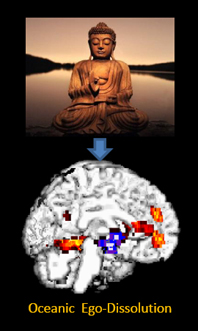 Understanding these mechanisms may have a large impact on public health because alterations of the ego can be associated with health-promoting as well as pathogenic processes. On the one hand, loosening of the ego boundaries can lead to a positive experience and new perspectives, characterized by feelings of unity and interconnectedness with all people and things, sense of sacredness, sense of timelessness and spacelessness, positive affect, insights about the nature of reality, ineffability and paradoxality (James, 1972; Stace, 1960; Hood, 2003). Recent studies in the USA have shown that psilocybin can foster such higly valued, positive "oceanic" states of connectedness and unity (Griffiths et al., 2006). Similar experiences have been reported in deep mediation and have shown to foster mental well-being (Byrd, Lear & Schwenka, 2000). On the other hand, loosening or loss of ego boundarieis associated with suffering is also a key symptom of various psychiatric disorders including schizophrenia and some personality disorders (Kohut & Wolf, 1978). Thus, understanding the psychological and neurobiological mechanisms of the various forms of altered of ego boundaries and self-control may open up new perspectives for the promotion of mental health, as well as devising more effective therapeutic tools and compounds for the treatment of ego/self-disorders .

The aim of the study is to identify neural signatures, behavioral and phenomenological expressions of self-related processes including: sense of agency, semantic distinction beetween self and other, selflessness (altruism), social agency, embodied self (interoception), and percuptual functioning of altered self including crossmodal processing.