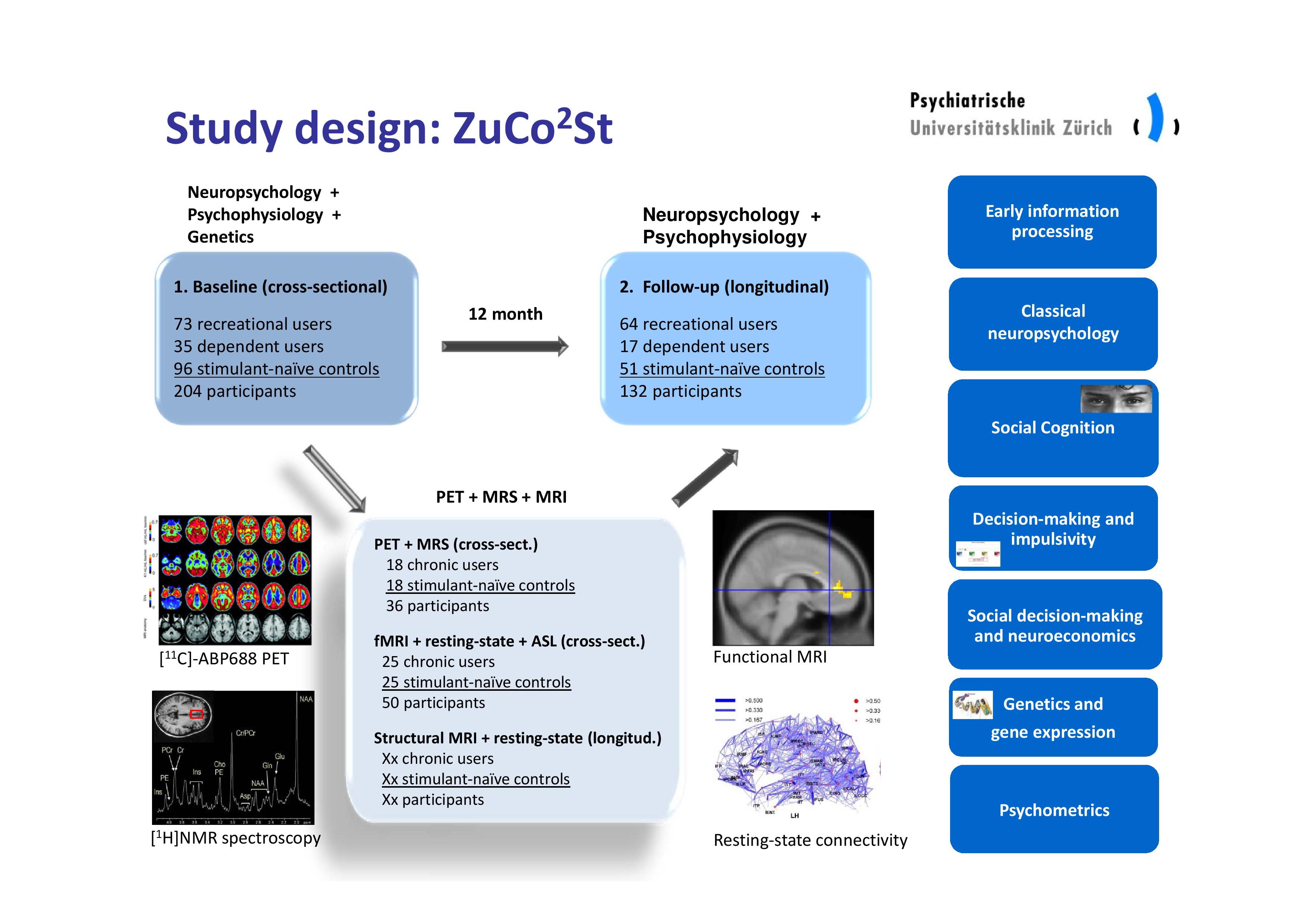 In order to comprehensively characterize social cognition and basal social interaction in recreational and dependent cocaine users for the first time, we developed and implemented the Zurich Cocaine Cognition Study (ZuCo2St), which was funded by the Swiss National Science Foundation (SNSF, grants PP00P1-123516/1 and PP00P1-146326/1). With this longitudinal study we pursued two main goals: First, we intended to characterise several facets of socio-cognitive abilities and social interactions of cocaine users under experimental conditions and second, we aimed to investigate whether potential alterations in social cognition and behaviour are predispositions or consequences of cocaine use. We not only focused on dependent cocaine users but also investigated the much more frequent group of recreational users who, while they are not (yet) addicted, administer the drug regularly for personal pleasure or other instrumentalizations (Müller and Schumann, 2011). Given that the transition to dependence is not dichotomous but instead gradual, advancing from habitual to a more and more compulsive use (Haber, 2008), recreational cocaine use can be seen as an intermediate step towards addiction. Examining recreational users holds several further important advantages: 1) they are, as a group, less burdened by psychiatric comorbidities (Smith et al., 2009), 2) they are less likely medicated with psychotropic drugs, and 3) they commonly display a reduced amount of polytoxic drug use. These advantages are essential for a study examining the effects of cocaine on cognition, given that polytoxic drug abuse and psychiatric comorbidities are major confounding factors in addiction research especially with dependent cocaine users (Prinzleve et al., 2004;Degenhardt and Hall, 2012). For the same reason, we aimed to focus on relatively pure cocaine users with sparse co-substance use. This was accomplished by analysing 6 cm hair samples (when possible), allowing an objective estimation of drug use during the past 6 month (Society of Hair Testing, 2004) and, thus, exclusion of polydrug users. Intake of any prescription drugs affecting the central nervous system (CNS) was a further exclusion criterion. Finally, participants with an axis-I psychiatric disorders such as schizophrenia, bipolar disorder, obsessive-compulsive disorder, and an acute major depression were excluded as well, as these disorders have a strong impact on several cognitive functions (Etkin et al., 2013). Importantly, cocaine users with previous depressive episodes or a diagnosis of an attention deficit/hyperactivity disorder (ADHD) were not excluded due to the high prevalence of these disorders in cocaine users (Rounsaville, 2004;Perez de Los Cobos et al., 2011).

At baseline, we were able to assess 250 individuals (142 cocaine users, 108 stimulant-naive healthy controls) whereof about 100 users (70 regular recreational users and 30 dependent users) and 70 controls strictly matched for age, education, sex, and smoking status, were included in the final analyses. We had to exclude 46 participants because of polytoxic drug use (primarily high concentrations of 3,4-methylenedioxy-methamphetamine (MDMA) and other amphetamines in the hair samples), lack of cocaine in the hair samples, or psychiatric comorbidities (e.g., schizophrenia or bipolar disorder) revealed by the psychiatric interview at the test day. At the one-year follow-up, 132 individuals participated, however, only 105 subjects (57 cocaine users, 48 controls) were suitable for inclusion in the longitudinal analysis as some users had changed their preferred substance (mostly from cocaine to MDMA and in one case to methylphenidate) or due to other exclusion criteria (e.g., stroke during the study interval, medication with psychotropic drugs, etc.). Due to missing data in the different tasks and questionnaires, the actual number of subjects in the experimental groups slightly varies across publications. The present text has been published in Quednow (2016).

Publications from the ZuCo2St can be found here: quednow (vonmoos or preller) (cocaine or MDMA or methylphenidate or PSU) NOT (liechti) - Search Results - PubMed (nih.gov)